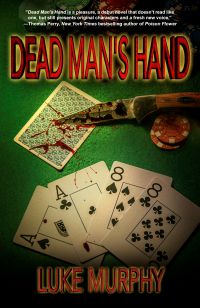 From NFL rising-star prospect to wanted fugitive, Calvin Watters is a sadistic African-American Las Vegas debt-collector framed by a murderer who, like the Vegas Police, finds him to be the perfect fall-guy.

Good evening. This is Nighthawk, your avian of the hour. With me tonight is Calvin Watters.

<Sigh> This takes me back.

I take it you're no stranger to the studio.

You wouldn’t know it by looking at me, but four years ago you media people were lined up for a piece of Calvin Watters, the next “Big Thing”. The rich had welcomed me into their group with open arms. But now I’m just an outsider looking in—just another thug to them. I might look like only a bill collector to you, but at one time I knew how to act with the arrogance of the very rich.

My keen senses perceive a certain amount of  bitterness on your part. What led to your fall from grace, or at least graceful living?

I’ll tell you what happened: Calvin Watters, an unstoppable force both on and off the football field, was brought down by his own foolish pride.

You've been quoted in the media that your career suffered for other people's mistakes.

You started to move forward then.

I was on my way back until Sanders appeared. Once he framed me for murder, and the body count mounted, Rachel and I were on the run for our lives.

The police are usually pretty savvy about set ups. What convinced them you were the best suspect?


Do I have to spell it out?

I’m the best at what I do. When my clients look at me, they see only one thing—professionally trained brutality. I’m tailor-made as a violent killer and African-American at that.

It had to be more than racial profiling.

My prints were all over that office. I had opened the doors, used the phone and searched the papers on Grant's desk. It was the prefect frame. I am an African-American former football star who can be shown to have gone bad. Even if I had rock solid proof of innocence, with all respect, things would not go well for me in a court. This isn't OJ all over again.

You have a hard road ahead.

My internal strength will never diminish.

Last night, for the first time in four years, I was able to go to sleep without pain. Everything I went through, from evading the cops, beating a hired killer, and proving my innocence, I know I will persevere and never quit again.

No offense, but I saw you limping into the studio.

After the way I pushed my body, my knee has a lot of new injuries, but I plan to start physical therapy in a week and resume my gruelling, daily exercise regimen in small doses.

You want to return to professional football?

<Laugh> I want to be "Superman" again.

You can learn more about Calvin in Luke Murphy's Dead Man's Hand, published by Imajin Books. Best of all, it's...