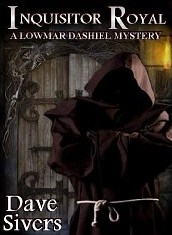 It's always a challenge when we have other-worldly visitors to the studio. Tonight we have Lowmar Dashiel, Personal Inquisitor. From what I understand, this is job is similar to being a private eye except in Andruan, our guest's hometown, lowlifes include demons.

Lowmar, I know this is all strange and new, but could you just stay seated and...

I have to say, if you’re trying to intimidate me with sorcery, you need to aim a little higher.  I mean, I’ve incurred the wrath of more than one first grade sorcerer and looked a blood demon in the eye.  So a few flickering lights and disembodied voices aren’t going to impress me much.  By the way, what’s this thing you’ve asked me to speak into?

It's called a microphone and it's technology, not sorcery. Also, believe it or not, I'm not trying to intimidate you - just interview you for the enlightenment of our audience. After all, you're not just any Personal Inquisitor, you're the Royal Inquisitor, right?

Damned Commander Boxen!  He was the one who persuaded the King to get me to look into Carnen’s murder.

He was the Sorcerer Supreme.

Look, I’m a personal inquisitor.  Divorce, blackmail, the odd missing person - that’s what I do.  Not murder investigations, and certainly not one where the Sorcerer Supreme has been killed by magic.  But the King wanted someone with no axe to grind, and Boxen thought I fitted the bill.

I got lucky that time, and the King was impressed enough to put me on a sort of retainer.  My associate, Grishen, thought it was hilarious, and dubbed me ‘Inquisitor Royal’.  He was laughing the other side of his dwarfish face a year or so later, when we stood with Boxen in a house in Andruan’s Dwarf Quarter, looking at the mutilated body of a maniac’s latest victim.  And then, when those assassination attempts on the royals started, the King looked to me to solve that one as well.

But now you have more prestige, more klout, that must make things better.

Things didn’t exactly get better when someone took a shot at me.  The trouble was, it might have been someone connected with one of the King’s cases, trying to keep me from the truth, but I’m not what you’d call devoid of enemies either.  By the way, the King didn’t seem to appreciate the difficulties of juggling two major inquisitions whilst keeping my less auspicious clients happy and trying to stay alive.


How difficult can your King make things for you if he's not pleased?

Grishen is convinced it will be our heads if we ever fail the King, but I’m more optimistic.  Maybe it would just be a spell in a rat-infested dungeon.

When I was talking to Grishen earlier, he suggested you have women problems on top of everything else. He mentioned a sorceress named Zarna, for instance.

Just because Zarna was the prime suspect in the Carnen case, some people seem to think my motives were more about saving her than about pleasing the King, or even the little matter of averting a new sorcerers’ war.  What man in his right mind would get involved with a sorceress of the first grade?  Especially one destined to be Sorceress Supreme?

Besides, I’m with Jode now.  Nice and uncomplicated.  Well, apart from her being a trained bounty hunter who was on the trail of her husband’s killer when we met.  She’s far too handy with a crossbow for me to dare look twice at Zarna, or any other woman.

What's next for you?

Well, I’ve still got my head attached, and I’ve avoided that rat-infested dungeon so far, so I wouldn’t be surprised if the King called upon my services again some day.  Meanwhile, I’ve now got Jode, as well as Grishen, to work cases with me, so long may the people of Andruan be unpleasant to each other and need my services.  When it comes to the personal inquisitor business, I’m still the first and the best

I suppose one of the lessons I’ve learned along the way is something my father used to be fond of saying.  He said you should never look back.  He and I didn’t agree on much, but he was right about that.  Although there’s a minstrel coming to town who I last saw a decade or so ago. Maybe I’ll take Jode and Grishen. It couldn’t do any harm, could it?

Why do I think those are famous last words?

Find out more about Lowmar Dashiel, Personal Inquisitor in Inquisitor Royal by Dave Sivers, available in Kindle at Amazon.com and Amazon.uk