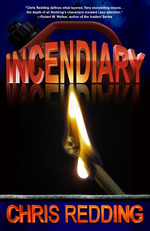 Chelsea James, captain of the Biggin Hill First Aid Squad, has had ten years to mend a broken heart and forget about the man who'd left her hurt and bewildered. Ten years to get her life on track. But fate has other plans.

Fire Inspector Jake Campbell, back in town after a decade, investigates a string of arsons, only to discover they are connected to the same arsons he'd been accused of long ago. Now his past has come back to haunt him, and Chelsea is part of that past.


My friends, we have Jake Campbell here in the studio. It's taken a bit of wheedling to get him beyond "No comment." Let's see if he's ready to talk.

You've been accused of arson, Jake. Why?

Because there was evidence at the scene that would implicate me. Someone planted it.

I assume the arsonist.

D'uh. Any idea who that is?

As an investigator, I can see how the evidence points to me, but I'm innocent. I don't know who's guilty.

But you must have some ideas.


Okay, tell us about Chelsea. I take it you guys have a history?

We were lovers when I used to live in Biggin Hill.

I left when I was first accused of arson. I'm guessing she didn't take it too well. I can't blame her. I didn't really ever say goodbye.

That's not a good way to keep a girl's interest, that's for sure. It certainly would make me squawk. Is anyone helping your investigation or hindering you, for that matter?

Both. Chelsea is helping me. She always thought I was innocent. Guess I didn't realize earlier on how important that was. And yes, the arsonist is putting roadblocks up so that I can't figure out who that is.

Good luck with clearing your name Jake... and clearing up things with Chelsea.

Want to find out what Jake doesn't know yet? Pick up Chris Redding's Incendiary, published by Imajin Books.