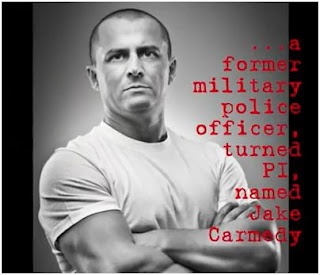 Wonder what that button does...

Don’t touch – Mr Carmedy, that’s my seat. Could you go over there? Thanks.

Welcome to Nighthawk Talks. Tonight we have Jacob Carmedy from Deadly Legacy.

You’ve been talking to the Chief, haven’t you?

Chief Igor Thorsen has been a guest here. Why do you ask?

It’s Jake, not Jacob. I can show you my birth certificate if you want proof. I let it go with the Chief. With you, not so much. And I’m with Garrett Investigations. Is Deadly Legacy another detective agency? They must specialize in estates. We – that is Garrett Investigations – specializes in bodily injury, security and related criminal investigation support.

It means we’re licensed to act as consulting detectives to the police. My partner, Joe Garrett, was a violent crimes detective with the City Police Services before he was wounded on the job. My specialty is security but I’ve done my share of following up on complaints of violence when I was an MP.

Most of the time Joe and I get hired by the police when one of our civil investigations turns out to be criminal. Sometimes Joe get’s called in just cause he’s Joe.

Now that Joe Garrett is dead, will you still be hired by the police?

I have my consulting license – took me long enough. It’s a lot harder to get than the private investigators license unless you were a cop first. Military police doesn’t carry as much weight, I found out. But I am qualified and experienced, so the business is still eligible for police contracts.

And your new partner, Kate Garrett?

If she’s crazy enough to leave a secure job with police services, she’d probably get licensed fast enough. She’s been a cop for a while and she made detective last spring. I remember Joe was really jacked up about that. Really proud.

How would you describe your relationship with Detective Garrett?

If you mean Miss Kate, professional is how I’d describe it. Joe, on the other hand, was my best friend and mentor.

Did you hit it off from the start... with Joe that is?
Yes and no. We hit it off, as you put it, well enough for him to hire me, but we both had a steep learning curve.

Tell us about your military career.

Okay. Tell us about you and Kate Garrett.

You call her "Damned woman!" But you really think a lot of her, don't you?

Then let’s go back to your service in Iraq.

I think Ms Garrett is being foolish. She has a secure job, doing what she wants to do, and benefits to boot. Why the hell does she want to be a private investigator? Because she thinks her father wanted it. Well, maybe he did, but Joe wasn’t infallible, no matter what some people think. And she’s bossy... well maybe not bossy but the take charge type. Independent.

That’s not what I said, Ms Nighthawk. Independent is good - but not in all circumstances. If she wants to be my partner, she’s got to stop acting like my boss.

And you’re attracted to her. That must be awkward.

Maybe we'll learn more about Jake Carmedy from Kate Garrett. Meanwhile, find out more on your own in Deadly Legacy by Alison Bruce.

Jake Carmedy has lost a partner, mentor and friend, but grief will come later. First, he has a case to solve, one that has detoured from a simple insurance case to a murder investigation. If that isn’t enough, Joe’s daughter seems to want to take her father’s place as his boss.


Also check out the Reader Appreciation contests at Imajin Books... where SUMMER SIZZLES!
Posted by Alison E. Bruce at 1:12 PM