Freesia Worth from Dark Waters 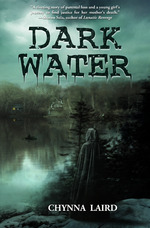 Tonight we welcome Freesia Worth.

(Muffled.) Wow. Sitting in here reminds me of the creepy interview room I was in when they were questioning me about Mizu and Rick’s Dad, Frank. You know, except there’s a lot more equipment in here.

Freesia’s story is told in Dark Waters from Imajin Books. Though only sixteen, Freesia tackled the mystery of her mother’s disappearance...

(Slightly clearer.) And more windows instead of the mirrors they have in those police rooms, you know?

And it’s a heck of a lot more echo-y in here. My sister, Sage, would really hate it in here. (Laughs)

If you come closer to the mike, the listeners will be able to hear you better and we’ll lose the echo.

After losing your father in Afghanistan a few months earlier, your mother mysteriously disappeared. Despite the hard work of Detective Barry Cuaco – he did work hard right?

Despite his hard work, the case was going cold...

Y' know none of this would have happened if people had just listened to me from the beginning! From the get-go, I tried telling people that something wasn’t right. I tried telling everyone that my mom wouldn’t have just left us alone, not with how much Sage needed her and after we’d just lost our dad. But no one listened to me, so I just went and figured things out on my own. Well, Rick and Mizu helped a lot too. Just goes to show that younger people have what it takes to solve problems too.

Why don’t you tell us about Mizu instead.

Wow. I’m not sure I really can. It hurts too much. I mean, I can tell you that she was a very strong presence. She was definitely someone who set her own path and didn’t listen to what others said was right or wrong. But there was something so hauntingly familiar about her, it was scary to be around her. And that’s all I can say about her.

You’ve had a helluva rough time in your short life.

Actually, life started really good for me and my sister, Sage. Then things kind of got really crappy for awhile. We lost our dad, then our mom, Sagey lost her voice on top of having to deal with all her sensory stuff and it was super rough. But everything turned out okay.

It sucks not to have our parents with us but, well, we only have good things ahead of us, I think.

I hope so. Thanks for joining us, Feesia.

Find out more about Feesia and Sage Worth, Feesia’s not so secret crush Rick, and the mysterious and illusive girl named Mizu in Dark Waters by Chynna Laird.
Posted by Alison E. Bruce at 9:14 PM