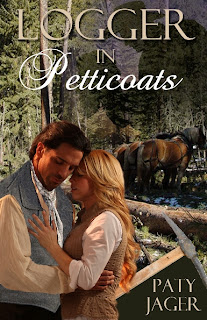 When Hank Halsey follows through on his dream of logging the family mountain he employs a family run logging outfit headed by Arvid Nielsen, whose crew includes three strapping sons and daughter.

Hank Halsey believes he’s found the perfect logging crew—complete with cooks—until he discovers Kelda Nielson would rather swing an axe than flip eggs. As he sets out to prove women belong in the kitchen, he’s the one in danger of getting burned.

To find out more about this Logger in Petticoats, we have her father, Arvid Nielson.

Arvid, your name and accept tell me you aren’t originally from these parts.
My wife Ingrid and I rode a boat from our home in Norway to find a place to raise our children where there would be room to grow. We began a logging outfit when the children were small. Ingrid cooked for the crew and as the children grew they became skilled at various logging jobs. Kelda, our daughter also helped her mother in the cookhouse. Now they are wood bosses and help take the load off my sagging shoulders.

Tell us about Kelda.
Kelda is my daughter. She is skatten min, my treasure. I wished her happiness as I have found with her mother. To help her along I found a man who would love and cherish her. Only I didn’t realize he wanted her on a pedestal and she refused to be anything other than herself.


How do you feel about Hank Halsey?
He is a rare man. I was honored he treated my Kelda so well. Treating like a lady. No one ever had because of her stubborn determination to best all men in the woods. But when they started butting heads, I was beginning to think I’d made a wrong choice.

When did things start to go wrong?
When Hank threatened my boys after they’d given their sister a playful spanking. Then, my Kelda, she hires a cook so she can sneak out and work in the woods. I tried to help them work it out but...

What happened?
I learned you can’t make people love one another  – but things work out in the long run if you leave them alone.

What do you see for the future?
Visiting relatives in Norway before my wife can no longer remember them.

I mean about the romance between your daughter and Hank?
Always listen to your wife and let your daughter pick the man who steals her heart.

Hmm. I wonder if Mr Nielson deliberately misunderstood my question. We’ll have to find the answers in Logger in Petticoats, available through Amazon.com and Barnes and Noble.

Find out more about author Paty Jager at patyjager.blogspot.com