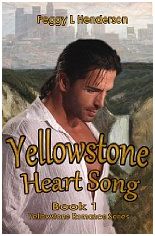 When nurse and avid backpacker Aimee Donovan encounters a patient who tells her he can send her two hundred years into the past, it's a challenge she can't refuse. She'll get to spend three months in the rugged Yellowstone wilderness at the dawn of the mountain man era. The only requirement: she cannot tell anyone that she’s from the future.

Aimee is transported back in time to the Yellowstone wilderness of 1810, a time when very few white men have ever seen the area. A local Indian, Elk Runner, sees her wandering in the wilderness, apparently lost, and reports back to his white adopted brother. Together, they return to find her clinging to life on a ledge.


Welcome Elk Runner. You are a Shoshone, right?
I am a hunter of the Tukudeka clan of mountain Shoshone. To the white man, we are known as the Sheepeaters, but our name means "eaters of meat."We are known for our skills at hunting the bighorn sheep, and making fine hides and bows. My people have lived in the sacred Yellowstone Mountains for thousands of years, becoming one with the spirits of the sky, earth, and water.

Tell us about Daniel.
My adoptive white brother - we call him White Wolf - is my best friend and his own worst enemy. He never knows what is good for him, even when she falls out of the sky. He has always been much too serious about life. Even growing up as children, he would get mad at the practical jokes I played on him. To this day, he blames me for a mishap with a skunk.

Maybe you better tell us about Aimee Donovan instead.
One day, while on a hunt with several other members of my clan, I saw the strangest thing. A white woman was wandering through the forest. She wore odd clothes, and chanted strange words. We all thought she was crazy in the head, but we knew nothing of white women. Perhaps they all act the way she did. I saw it as an omen. I went to White Wolf's cabin to tell him of this woman. He didn't believe me, even calling me the crazy one. He relented and went with me to find her again. I told him the spirits must have brought her to him, since he obviously could not find a woman on his own.

What did you make of her?
She is the strangest woman I have ever met. No meat on her bones, and disrespectful to a hunter. White Wolf will certainly have his hands full with her. She does not understand our ways, but she is brave and has the gifts of healing. We all suspect she is a puhagant, a person endowed by the spirits with magical powers. Once she learns to be respectful, she will make a good wife.

Dosa Haiwi - that is the name we have given Aimee Donovan. It means white dove, because she is like a dove that flew from the sky to rescue my brother from a lifetime of loneliness. She saved my life when some dirty Blackfoot warriors ambushed me. An arrow to the gut is fatal, but she used her magical healing powers to save my life. I will always be in her debt. The hungry look on my brother's face when she examined my healed wounds with her hands will always stay in my mind. <chuckle>

Hey, it was his own fault. He refused to claim her as his wife. Her hands could have been all over him, too, if he wasn't so stubborn.

So, Aimee caused some friction between you two.
The more I told him he needed to take Aimee as his wife, the more he seemed to fight the idea. I don't think this will affect our relationship. I know she will make my brother a better person, which will be a good thing for all of us. If only the stubborn fool realized this sooner.

Are you glad she "fell out of the sky"?
Well, I am alive because of Aimee, so yes. The best women sometimes fall from the sky. <chuckle> Little Bird, my wife, can't read, so I'm safe to say this.

Where do you see yourself in the future?
The future? Some say Aimee came from the future. I prefer to stay right where I am.

Fair enough. Do you have any final words for our audience?
The advice I gave my brother - a man cannot live without a woman. The spirits have brought this woman to him, and only they know the ultimate reason.