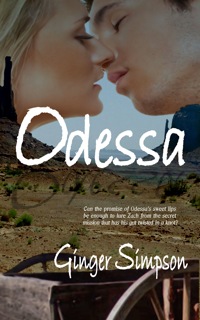 1886: The wagon carrying Odessa Clay and her father overturns, killing him.  Odessa is near death when Zach Johnson, a reluctant outlaw, finds her. Miss Clay has joined us today to tell us about her ordeal.

Why don't you start by telling us a bit about yourself, Miss Clay.
Well, I suppose you could consider me an orphan, since my Ma died some time ago, and my father recently passed in the wagon accident that started my story.  Pa wanted to move me to Phoenix so I could be around a better class of people, and after a whole lotta trials and tribulations, I finally made his dream come true.


Why Phoenix?
Pa wanted to move us to Phoenix to be closer to his sister, my aunt, Susan.  Ever since Ma died, I really haven't had a woman's influence in my life, and I reckon he thought I'd have a better chance at being courted by a good man.

Someone like Zach Johnson?
Oh, Lordy.  The man is truly handsome and he makes my stomach feel kinda funny, but he's so bossy.  I keep haven' to remind him he ain't my Pa.

Tell us about the journey.
Well, things were going fine.  It was hotter than Hades out there in the desert, and if it had been a tad cooler, perhaps Pa wouldn't have cracked the reins to get the horses moving enough to stir a breeze.  If the wagon wheel…<choked sob>  the wagon wheel hadn't struck a rut in the trail and caused the wagon to turn over, Pa never would have gotten pinned.

They say what doesn’t kill you makes you stronger. Do you think that applies to you?
You bet.  I never expected to be left alone in the middle of the desert.  I had two choices: Die with Pa or try to find my way to Phoenix.  I figured I'd just follow the trail, but I didn't get very far.  Thank the Lord, Zach came along when he did.

I expect the experience was educational to say the least.
I've learned I can survive just about anything.  I went from being lost in the desert to watching a man die right before my eyes in a saloon.  Then I got kidnapped, saved by a couple travelling to Phoenix in a wagon, and I found my Aunt Susan.  I'd say that was a pretty decent lesson.  Wouldn't you?

Tell us a bit more about Zach. Was it love at first sight?
<soft chuckle> Hardly.  He might be a tall good-lookin’ drink of water, but I thirsted for the real thing when I first saw him. I had collapsed from heat exhaustion and thirst in the middle of the trail.

What now?
I'm pretty sure Zach and I have a future together.  You know, when he found me, he was on his way to join a pretty famous outlaw's gang in order to get enough money from robbing a stage coach to save his Pa's ranch.  He took the time to get me to safety, and you'll find out when you read my story, neither of us are very good at listening to advice.  He's about as bullheaded as they come, and I can be pretty darn stubborn, too.

Looks like it’s time for you to go, Miss Clay. Folks will have to read about your adventures in Odessa, by Ginger Simpson, published by Eternal Press and available in eBook and paperback.

While you're online, mosey on over to Ginger's blog Cowboy Kisses.
Posted by Alison E. Bruce at 12:13 PM