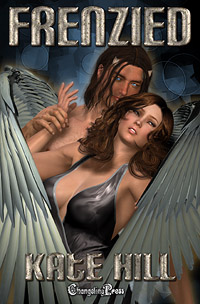 Nighthawk here and my New Year's resolution is to interview as many new characters as I can get my claws into. Any suggestions? I'll wing it and swoop down on them.

Speaking of wings, I have Michael here from Kate Hill's Frenzied. Michael is an Angel-raised Demon. If that doesn't mess with a man's head, I don't what would.

Loren, my foster father, took me from Hell soon after I was born. He believes every new soul deserves a chance and regardless of our physical bodies, our spirits are neither good nor evil until we choose one way or the other.

Still, it must have been a challenge.

Living up to an angel’s expectations hasn’t always been easy, but I’ve learned that he never asked for anything I couldn’t give. He took a lot of risks to give me the chance for a better life.

I'd say. But Frenzied isn't a story about your childhood, is it? You take your daemonic skills and go on a manhunt for the killer of your favourite girl from an "escort service". You don't look like a man who needs an escort service. You look like a guy who could get a date on a desert island. Meanwhile, you've made the suspect list of the victim's sister. How did you get into this mess?

<Laughs>Which mess? Fighting evil or blamed for Marla’s murder? I’ll answer both. Though Loren taught me to get in touch with my “good” side, that means admitting that as a demon I also have an evil side. I decided to use my violent streak to do battle with my own kind. In a way that also answers the second question. One of my demonic cravings was a need for rough sex. I was never rough with my partners, but I needed them to be rough with me. It’s too complicated to explain here and now, but let’s just say Marla gave me what I needed. Her sister misinterpreted our relationship and assumed I killed her.

Tell us about Marla's sister.

Wow. There’s so much I feel about Britt. Most of it is too personal to talk about. She’s the only lover who truly knew me. She saw my demon side and she wasn’t afraid, at least not so afraid that she couldn’t accept me as I was. I consider Britt my “first” time, not because I never had sex before but because it was the first time I had sex without pain. She allowed me to be who I am. I didn’t need to hide anything from her and I never imagined that could happen.

This is hard to talk about. Just thinking about it makes me. . .<sighs deeply> When Marla’s killer, another demon, killed Loren and nearly killed Britt too—actually she was dead for a brief time—that’s when things went wrong. I felt it was my fault. I wasn’t there to protect them. Yet at the same time it was when things went right. They were no longer there to guide me, but they had changed me for the better. What I learned from them will always be with me. Because of them I learned that nothing in Hell can ever lure me back there.

So, what does a good looking demon do for a living?

My career is security and keeping the world safe from demons. I can’t go into detail about my new relationship with the angels, but I’ll say this much. I’m forever on their side and I think this time they know it.

And your love life?

It’s better than I ever imagined it could be. No words can describe my love for Britt. It’s a joining of hearts and souls. Yeah. That’s about the best way I know to explain it. As for my relationship with Loren, in so many ways talking about that hurts the most. I know he’ll always be with me. Like Britt is my soul mate, so is Loren, only in a different way. He’s on a higher plane now and still fighting the good fight. Loren is my friend, my father and my teacher. Always an angel.

Bottom line, despite the hell you went through, are you a better person?

I think so. I hope I can continue living up to the expectations of angels.

I learned that parents love you no matter what, even when you’re not so nice, and that there’s more to being a real parent than physically creating a child. I’ve also learned that true love is unconditional. Oh and I learned that if you give your girlfriend access to your car collection, make sure you teach her how to drive a standard. <Chuckles>

Where do you see yourself in the future?

In the future I see myself fighting demons, learning from my new boss, the warrior angel Rutendo, and having a happy life with Britt.

Any final words before you fly off to battle evil?

Listen to the people who love you. You know who they are. Don’t place limits on yourself and always believe in yourself.

I don't know about you, but I wouldn't mind a little rough love with that guy. To find out more about Michael, read Frenzied by Kate Hill.