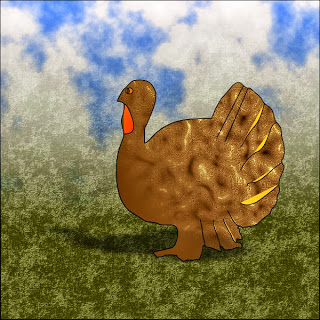 Nighthawk here with a special guest, The Thanksgiving Turkey.

Thanksgiving not only comes earlier in the year in Canada, it was celebrated in what would become Canada 43 years before the Pilgrims sat down to give thanks near Plymouth Rock when Martin Frobisher threw a thanksgiving dinner in Newfoundland.

Neither Frobisher nor Pilgrim likely had turkey on their menu. If they did, it was nothing like the bird we roast now. Now the turkey is a holiday icon, so much so that Thanksgiving is also known as Turkey Day.

Our guest is that iconic bird. Welcome.

How do you feel about your role in this holiday?

Well. That just about says it all.

To all our Canadian friends, Happy Thanksgiving. To our American friends, Alison and I will be thinking of you.