Nighthawk Talks to Cynthia Young from Murder for Glacier Blue 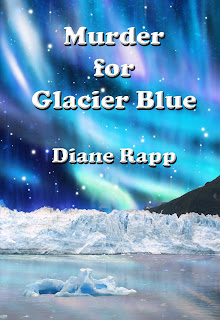 "A bleached blonde struts into the studio, dressed in a slinky red dress, six-inch Manolo Blahnik heels, and a full-length sable fur."

No, this isn't the start of a blond joke. This is tonight's guest Cynthia Young, making her entrance. Ms Young appears in Diane Rapp's new book, Murder for Glacier Blue.

The book title refers to a painting which is taking an Alaskan cruise as part of a charity auction. Steven Young and his fiance Kayla are working security for the cruise line. As if art theft and murder aren't enough, the couple have to contend with Young's ex-wife, who is now coming through the door.

Anyone here? Hey, out there! Is anyone coming to chat me up? Bloody Hell! You’d think a proper gent would show up on time. Where is this Nighthawk chap?

Who’s really talking through this here bird? I was married to a bloke who did a magic act, so you can’t fool me.

So, you were married to a magician. You were also married to Steven Young, right?

Yes, he’s my ex-husband. Stevie worked undercover for Interpol, but I weren’t allowed to tell nobody and got ever so bored. Now he’s all over the press as a bloody hero, saved a ship from sinking in the Mediterranean and arrested a ring of smugglers. Workin’ for the cruise line, I bet he makes lots more money. I might just give him another tumble.

What about his fiance?

Kayla? I don’t know what Stevie sees in her. She’s got no sense of style, loves to wear trainers and pulls her ponytail through the back of a sport’s cap. You know, I can steal Stevie away from Kayla any time I wants.

Mind if I take off me fur? It’s gettin’ a bit warm in here.

Don't worry, Ms Young. My producer will put your coat somewhere safe. Away from our equipment. Let's get back to the interview. What prompted you to take a cruise at the same time as your ex and his fiancé?

I came along with Phillip, one of Stevie’s mates from school. Me and Phillip are engaged. At least we were engaged before Jeffrey got murdered…

The artist you were having an affair with, right?
I can’t talk about those events without me lawyer present. Are you recording this? Who can hear me? Honest! I never knew the details of Jeff’s scheme to steal that painting, and them coppers can’t hold me responsible for…

“I know! This is one of Steven’s tricks!

Ms Young, will you please sit down.

That copper thinks he’s ever so clever, using a talking bird to get me to spill me guts. I won’t cop a plea without a deal in writing! You tell Mr. Law-and-order that he made a big mistake! He can’t trick me into tellin’ all I know before I gets into witness protection. That murderer is still out there waiting for me. I don’t care if Steven thinks he’s getting married! I’m in danger, and I’ll make him help me! We took our vows long before he met that tart, Kayla

And Cynthia Young has left the studio. I wonder if she'll remember her coat.

Imajin Books on sale until August 31, 2013.
Buy one and enter the draw for a Kindle Fire.