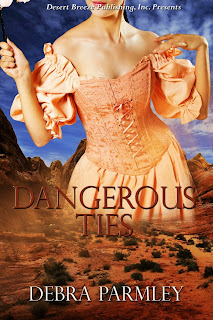 Up until recently, Miss Hayes was engaged to marry. Her fiancé turned out to be a no good con man who persuaded the people in her hometown to exchange their gold for worthless paper. Leave us say, the folks weren't happy and, to their discredit, thought Miss Hayes, one of their own, was involved.

All set, Miss Hayes? Just talk into the microphone there.

Well, life is just full of surprises. I thought nothing would surprise me any more. Goodness. This metal thing will share my voice with people?

Well I suppose you'll want to know about the bank notes my ex fiancé stole from the townsfolk. I do not know where they are and I never did. So don't start down that trail. I won't stand for it.

Calm down, Miss Hayes. I'm not saying you're involved or that you know anything about the gold.

I do apologize. Too many people have assumed the worst of me when I gave them no cause to. It's an awful thing when you're telling the truth and no one believes you. Simply awful.

They didn't just talk behind your back, did they?

Why if Nicholas Brace hadn't shown up when he did, before that rope broke, I wouldn't be here talking to you today. That man saved my life. And he believed me too, when no one else would. He's the one man who has always believed me and never doubted.

What happened to your fiancé?

He just up and disappeared one day, taking the gold with him. I can understand how the townsfolk were upset. It was a terrible thing he did, talking them into exchanging their gold for his worthless bank notes. Shelton Security bank notes aren’t worth the paper they are printed on. You might as well use them to light your fireplace if you have any of them.

How did you get involved?

My cousin Carl talked me into coming out west and introduced me to Mr. Shelton. Why, if I'd stayed back east… But then I wouldn't have met Nick. He's a good man that Nicholas Brace. Handsome too. When he looks at me I feel warm and happy, like the sun has just come out from behind the clouds. He taught me how to shoot to protect myself, so I wouldn't be at the mercy of men like Kingston and his hired guns ever again. But I'm worried about him. He's riding into town right into that nest of snakes and I know exactly how quick they can turn mean on you. I aim to follow him somehow, if I can't talk him into letting me go with him. I couldn't bear it if something happened to Nick.

Maybe I should be asking about Nick. Do you see yourself having a future together. A wedding, perhaps?

Goodness no. Wedding? (squeak) No, look what happened the last time I got engaged. I'm in no hurry to marry anyone. Though Nick is a fine man. But a future with him? No, I really can't say. I just want him to be alive and healthy. As long as he is alive and healthy I will be happy. He has his life on the ranch up north and I've been enough of a bother to him aleady. He's late delivering his horses, after taking care of me. No, no, a future with Nick would be too much to hope for. I can't think about that now. I have to get to town.

We'll let you get going, Miss Hayes. Before you go, is there anything else you'd like to share with our audience?

Well yes, that life is short and people can't always be trusted but there are still good men in the world. I'm lucky such a good man found me in time to save my life.

Miss Hayes has left the building. To find out more about her, and the handsome Nick Brace, check out Dangerous Ties by Debra Parmley.
Posted by Alison E. Bruce at 12:00 AM