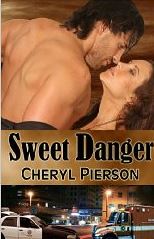 Well, I survived doing my taxes, but just barely. Thank heavens for good friends who send their hot characters my way to cheer me up. Tonight we have Jesse Nightwalker, from Sweet Danger by Cheryl Pierson. Jesse is certainly easy on the eyes, even for an old bird like me.

Welcome to Nighthawk Talks. You just faced the notorious Hardin gang in a deli shootout. You're looking a bit worse for wear right now, Officer Nightwalker, but you are a tough customer.

I’m a survivor and I survived. But I have to admit, I had a few moments where I didn’t think I was going to—and I was worried as hell about Lindy and Nash. Tabor Hardin is one mean son of a bitch—not above harming women or children, and I knew I was dead the minute I realized he was the one taking over the deli. What are the odds? Talk about being in the wrong place at the wrong time.

Tell us about Lindy.

I’d had my eye on Lindy for several months—a year, to be exact. She lived two doors down from me and our mailboxes were right together—Jesse Nightwalker, Lindy Oliver. But that day, she was behind me in line at the deli and we started talking. It was kind of awkward, in a way, because I caught her checking out my…backside. But as it turned out, we both wanted the last sugar ring in the case, and of course, I took something else so she could have it. Abe Silverman directed us to sit together at one of the back booths, since the place was packed. It wasn’t long after that when Hardin and his gang came in. I pushed Lindy under the table, told her to go out the back way. But I made one mistake. I kissed her.


Why was that a mistake?

Because it changed everything for both of us. My wife had died four years earlier and I hadn’t felt much at all emotionally since then. But when I kissed Lindy, I knew that had just changed in the blink of an eye. When she looked up into my eyes, I could see she felt the same. She wasn’t about to leave me then—especially when she saw that I’d taken a bullet meant for her.

I can see how that would have spelled trouble.

Going back to what? Your job? The dangerous life you lead?

Being an undercover cop was a job I always took seriously. I think I held on to it because Erica, my late wife, always threw it up to me. Wanted me to quit the force and do something else.

How did your wife die?

They said she committed suicide…I was on a stakeout. Turns out, that wasn’t what happened at all. It was a relief to find out what really happened, in a way—so I could let go of some of the guilt. But that was also why what happened in the deli just twisted me up in knots—I knew I couldn’t deal with falling in love with Lindy to have it all jerked away. Turns out, I didn’t have much choice in that.

We often don't when it comes to love.