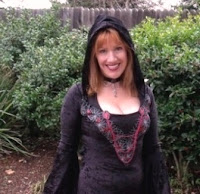 And now for something completely different... Jeani Rector publishes Horror Zine, a place where great horror and suspense characters reside.

Tell us a bit about Horror Zine and how you got involved in it.

I am also a writer, and I used to submit stories to online magazines quite a bit. Suddenly the "Great Recession" hit and online magazines started folding, one right after the other. When even The Harrow went on hiatus, I realized someone needed to step up and fill in the gaps. Why not me? So in July 2009, the very first issue of The Horror Zine went up.

The funny thing is, I chose the name The Horror Zine simply as words someone would accidentally stumble across while doing Google searches. I had no idea that I could have named the magazine anything I wanted and it would be successful enough that people would search it out. They don't find it by accident; they know all about it!

Are all horror stories paranormal?

There are also sub-genres that I do not accept, such as slasher, gore-for-gore's sake, and I don't want anything that harms women or children. No torture, either.

What kind of stories scare you the most?

Now that's a good question. Probably what scares me most are the stories where ordinary people wind up in extraordinary situations. The ones that could really happen in real life, to me and even you.

Vampire or werewolf? Which would you rather be bitten by?

I would prefer to be bitten by a very sexy human man. LOL. But I gravitate towards werewolves because vampires are a bit over-done right now. You would need a brand new twist to make a vampire story stand out from the pack. Or are packs referring to wolves? You know what I mean!

Survey says...
Twilight and Zombie Apocalypse notwithstanding, the creatures of the night that most readers want to hang out with are ghosts and demons.