Every Parent's Nightmare from Children of the Fog 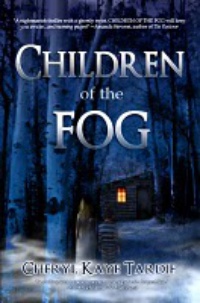 YOU HAVE 10 SECONDS TO MAKE A DECISION:
Let A Kidnapper Take Your Child, Or Watch Your Son Die.
Choose!

That's the decision Sadie O'Connell, bestselling author and a proud mother, had to make. Fear, grief and guilt rip her apart.

Hi Sadie, tell us a bit about yourself.

My name is Sadie O'Connell and I'm a published author of romance, though my most recent work is children's fiction. I wrote it especially for the love of my life—my son Sam.

Having a child didn't come easy to me. When Sam was born, I was ecstatic and I dedicated my life to being a great mother, a good wife and a caring friend. But life hasn't been easy. Sam hears perfectly but is mute, and I don't know why. And Philip isn't exactly the most faithful husband. As for my best friend Leah—well, you'll have to read the book.

And I guess I should also tell you, I'm an alcoholic.

For a couple of weeks now – longer before The Fog took my son.

Tell us about The Fog.

He's a serial kidnapper and just his name alone strikes fear into the very core of every parent's heart. I first heard about him in the news, when a boy and girl went missing. Every year, he'd take two more. When Leah and I went for coffee a few days before Sam's sixth birthday, we read about another girl.

I never thought for one moment that my beautiful boy Sam would be next.

Everything started with Sam's birthday party. Later, I thought I heard Philip returning home from another "late night at the office." But it wasn't Philip. I knew instinctively that something was wrong—a mother's intuition. So I went to check on Sam. And found The Fog.

You must really hate him for what he did to you and your son.

After everything that has gone down, I have very mixed feeling about The Fog. He was clearly insane, but now that I know his story, I have to say I feel for the man. He was left behind in the system and how can I really judge him? I was lost too for a while. I turned to my old habit—alcohol—and it nearly killed me.

You were given a choice—to let The Fog take Sam or watch him kill Sam. How difficult was that choice?

It was the most difficult, mind-numbing decision I have ever had to make. My first instinct was to fight for my son. It was horrifying to think of The Fog walking away with Sam. I couldn't even fathom what atrocities my son would endure. So I tried to fight. But I'm not a physically strong woman. And this was a man who knew how to fight—and how to kill. Though I tried, he beat me until I could no longer fight. When he held a gun to Sam's head, I couldn't breathe. So I made my choice. I let The Fog take Sam.

I know some people may not understand my decision. All I could think of was that Sam would be alive, at least for a while, and maybe he could be rescued. The only other choice was to have him shot in front of me. What would YOU do?

How has all this affected you?

I am still a writer. I'm writing more children's books than romance though. I'm not sure I believe in romance any more. I do have some new men in my life, but they are friends. Well, there's one...who knows?

As for Philip, he has a new home. He'll always be Sam's father. I loved Philip once. I am working at forgiving him for everything he did.

Leah and I are working on establishing trust in our relationship. Some days it's hard. We'll never have the same relationship we once had.

Is there anything positive you've gained from your experience - aside from the return of your son? Do you think these events have made you a better person?

I'm not sure if I'm a better person. I have faced my own demons, though there are nights when things come rushing back and leave me running to Sam's bedroom to make sure he's still there.

I think I'm not quite as weak as I once was. I've learned to open my eyes, see things for what they are and fight for what I want. I've learned to not take anything for granted, especially my son. And I've learned that swearing is very therapeutic. Does this make me a better person? I don't know, but I'm working on the new me daily.

I've learned that a child—even a mute child—is the most blessed gift a person could ever receive and to treasure that gift for an infinity.

Where do you see yourself in the future?

I see myself watching my son's children and being thankful every day for the gift of life. And I see myself always honoring those who came to save me when I was so far down a tunnel of grief that I couldn't see a way out.

Having gone through this experience, what would you tell someone in a similar situation?

I hope and pray that no one is ever forced to make the decision I was. But if it happens, I pray they find a way to make peace with their choice, no matter how it turns out.

Parents, love your children and treat them as the wonderful gifts they are. Some gifts aren't here forever.