From Under A Texas Star - Marly Landers 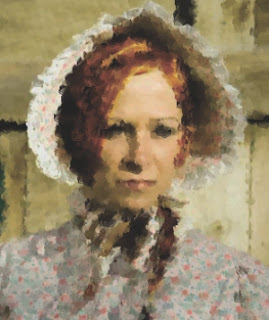 Tonight on Nighthawk Talk, we welcome back Marly Landers from El Paso.

I'm not from El Paso, I'm headed for El Paso. I notice that nice Cherie girl isn’t here. Does that mean I won’t be asked about my glutes and abs? I never did find out what she meant.

We won’t talk beauty tips this time.* Instead, perhaps you could tell us about your journey so far.

That's a long story. Aunt Adele was sending me to a convent school. I’d rather not go into the reasons. Let’s just say, I had other plans. So, I purposely took the wrong train out of Kansas City. Then I had steal boys clothes and muddy my trail so my aunt wouldn't figure out where I was going. Not that she would care too much but I bet she made Sheriff Langtree look for me when I didn't turn up...

How about starting when you met Ranger Strachan?

I guess I first noticed him in Abilene but we met in Dogflats. By that time I was having to walk or hitch rides to get from town to town. He'd been following me for a couple of days – though he said I was following him. He bought me a steak dinner after I gave my supper away to Mr Hayes. He lost his son in the war and he really wanted to blame someone but mostly he was just sad and drunk and whatever Jase might think, I don't think he really would have hurt me.

He only left a little bruise. I got much worse falling of Trouble.

Jase's horse really. I was borrowing it. Except.... well... I really did feel like he was mine. That's what made it so sad when...

You know, this is really something the way I can talk to you and people all over can hear me. Is it like the telegraph? Does my voice carry over wires?

Sort of. What about Trouble?

He was a good horse, even if he deserved his name. Jase said you were going to ask me about being a detective - though I'm hardly that. I just helped out some with the murder investigation. I mean I did figure out who killed Marshal Strothers, but Jase was the one that proved the case and even if I did break up a few bar fights, I think he only made me deputy to keep me safe.

Marly, do you ever run out of breath when you talk?

You can find out more about Marly Landers in Under A Texas Star, by Alison Bruce
* And in her previous Nighthawk Interview.

Under A Texas Star is available in paperback at Amazon.ca, Amazon.com and Barnes and Noble on sale in eBook format at Amazon.com , Amazon.uk and Smashwords.
Posted by Alison E. Bruce at 2:32 AM