To Have to Hold - Tempest and Buck 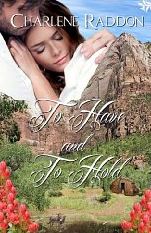 "A widow with two children, Tempest Whitney has had to mortgage everything to repay the money her husband had stolen. But even as she struggles to hold onto her Utah homestead, a scheming rancher buys up her debts, demanding she either get off his land or marry him. Then a dark-haired stranger shows up, claiming to be her dead husband . . ."

We have that widow and dark-eyed stranger with us today.

Tempest, truth now, what was your first impression of Buck Maddox?

T: Oh my, well, much as I regret having to admit it, my heart leaped right into my throat at the sight of Buck standing outside my door. It was all I could do to hang onto my dignity and not jump on him. And to work up some anger at the confounded man when I thought he'd killed Skeet.

B: Whoo-hoo. Honey, I wish I'd have known that at the time. The only thing that would have kept your virtue safe would have been those two darlin' babes of yours. You were a mess, your hair all scraggly and, Lord, what a temper! But I'd never seen a woman more tempting.

The woman was tempting, but what about the ranch and her menagerie? That must have been daunting.

B: I admit I was a bit taken aback by what you call her ranch. Neither prosperous nor tidy are words I would have used in describing it. By menagerie, I reckon you mean her critters, not sweet little Ethan or Angel. To tell the truth, I would have had to applaud her ingenuity for earning her living. Who would have thought to raise and sell cats, of all things? Course, there were the mules, too.


<mutters> Cats. Why did it have to be cats?

It's rough land, what makes you love it so much, Tempest?

T: Oh, I didn't love it at first, not by a long shot, but those magnificent sandstone walls looking like they'd been sculpted by God, and with their Indian drawings on them and all, well, they grow you, until you wonder how you ever lived anywhere else. I know Buck feels the same way about it as I do now.

I can see that. Though I suspect he'd grow to love anything that you loved and probably hate what you hate. Speaking of which, Jonas Creedy figures prominently in your lives. Tell me about him.

T: That man! I still shudder at the very mention of his name, the low down, skunk-faced---

B: Now, Tempest, honey, shouldn't say unkind things about the dead, now should you?

T: Humph. You weren't the one being leered at by him, Buck. I just thank the Lord you came along and rescued me, you darling devil, you.

B: Damn. Are we about finished here? I need to get this woman home, fast.

If you want to learn more about this charming couple, pick up To Have and to Hold by Charlene Raddon.