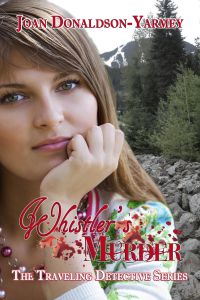 With Joan Donaldson-Yarmey’s Travelling Detective Series, the trick is to pin down a character long enough to interview them. Elizabeth Oliver proved challenging, until she got waylaid by murder.

I work at a long term care facility in Edmonton. While I like my job, my real passion is to travel and write about the places I visit.

And still you find time to get involved with murders.

I was trying to write an article on the resort town of Whistler.

Are the victims anyone you know?

Two people died before I got there and the third victim I only knew briefly.

How did you get involved?

I really don’t know. I came to Whistler with my friend Sally who was attending a Science Fiction retreat. But seems that every time I begin my research I get drawn into a mystery. Like when I travelled to the Crowsnest Highway in Southern Alberta, I hadn’t even made it to my destination when I met a man who had discovered a body in a septic tank. There was another death before the mystery of who the body belonged to was solved. Last year, though, my boyfriend, Jared, asked me to find out if his mother had actually committed suicide when he was four years old or if she was murdered. That was really tough on him because he found out a lot of secrets about his childhood.

Yikes! That would be tough.

Finding out what really happened to Jared’s mother took a toll on our relationship for a while.

I can imagine. But tell us about Whistler. When did things start to go wrong?

As soon as I arrived at the Bed & Breakfast and saw the house next door being demolished. The owner of the B&B told me that there was a rumour that a body had been hidden in the house years ago.

Actually, solving mysteries has made me decide to branch out into true crime writing. I don’t know if I’m a better person for my experiences, but hopefully I’m a better writer, since I sold an article to a true crime magazine.

Where do you see yourself in the future?
I want to travel across Canada and write about the places I see. I would like to write a travel book and also a true crime book about the mysteries I have been involved with. I can even see myself writing a mystery novel.

Let us know when you do. Meanwhile, anyone out there wanting to learn more about Elizabeth Oliver’s adventures - or should I say misadventures - should check out Whistler’s Murder, published by Books We Love, available in eBook and trade paperback.

Next week, you better watch out, you better not cry... you know who is coming to Nighthawk.
Posted by Alison E. Bruce at 3:28 PM