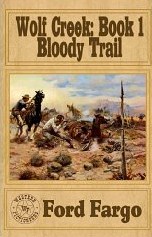 Welcome back to Nighthawk Talks. This is the third in a series of four interviews with residents of the town of Wolf Creek who can be found in the pages of Bloody Trail by Ford Fargo. Ford Fargo, by the way, is not one author but many. Today's guest is the creation of Troy D. Smith, who is also the editor of the Wolf Creek series.


Tonight we are joined by Charley Blackfeather, a black Seminole who works as a scout for the cavalry outpost at nearby Fort Braxton and supplements his income by trapping, was dropping off some traditional Seminole medicines to the town doctor when the outlaws struck. He has encountered the Danby Gang before, when he was a Union soldier and they were riding with Confederate guerrillas William Quantrill and Bloody Bill Anderson. He volunteers for the posse, but is troubled when he recognizes one of the other posse members from the war as well…

This room is strange. But I’ve seen it before, in a dream –there is strong medicine here.

I've always thought so. How long have you lived in Wolf Creek?

I don’t really live in Wolf Creek, I just kinda pass through now and again. I live on the prairie. I scout for Colonel Vine over at Fort Braxton sometimes, when they need me–most of the time I hunt and trap. I bring my hides in to Wolf Creek ever’ month or so, and usually head over to Asa Pepper’s saloon to have a beer. I been comin’ around town like that, off and on, for ‘bout a year.

I take it, you have no family to tie you down to one place.

I used to have a wife and three young’uns. They’d all be growed by now with families of their own, if they’d lived – but they all died when the Confederate Cherokees attacked Opothleyahola’s band at the beginning of the war. And there’s my pa, I reckon he was born a slave in Georgia but ran away to the Seminoles in Florida and married my ma–but he got killed a long time ago, back yonder in the swamps when our people was fighting the U.S. Army.

And yet, you later fought with that army.

Like a lot of my Seminole brothers, I fought for the Union in the war. Partly because of what the Reb Indians did to my family–but I was Union before then, that’s why they done it.

Why fight at all?

Why was I Union? (snort of laughter) Well, let’s just say I wasn’t as much for the Union as I was ag'in' slavery. I take that kind of behaviour personal.

I understand you’ve had some prior experience with the Danby Gang. Can you tell us about that?

(Takes deep breath) But you been real polite and neighbourly, so I’ll say this much… That bunch that rode with Bloody Bill was as low-down as they come. I was at Centralia, where they slaughtered a whole sight of Union soldiers who had surrendered. One of the ones they killed was… well, somebody close.

So this is about vengeance for you.

(Grunt) My people believe in balance. In life for life, eye for eye. We call it Blood Revenge–till a death has been avenged, the world ain’t right. And I been out of balance ever’ since that day at Centralia… and when I seen Jim Danby robbin’ the Wolf Creek bank, I knowed I was gonna finally have a chance to get that balance back. And that’s all I’m sayin’.

Which means we'll have to find out the rest of this story in Wolf Creek Book 1: Bloody Trail, written by the authors collectively known as Ford Fargo, published by Western Fictioneers.